Chat with us, powered by LiveChat Skip to main content

BLACK FRIDAY SAVINGS: UP TO 60% OFF SELECT CYCLING GEAR | FREE SHIPPING IN CANADA ON ALL ORDERS 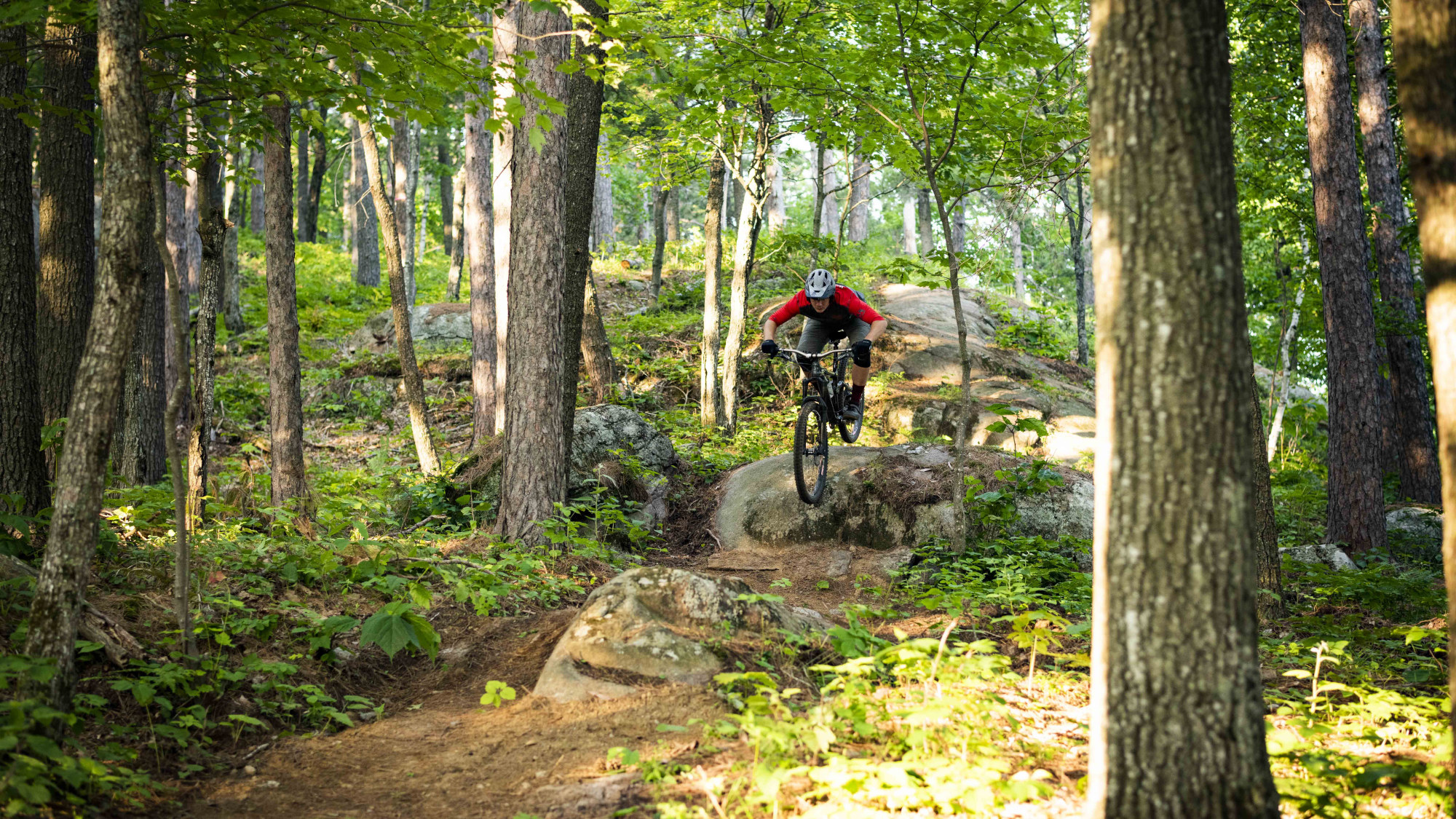 Sitting in the gazebo outside the main chalet at Mont Sainte Marie, trail builder David Marchand-Smith recalls a time seven years ago that led right up to today.

“I had been backcountry skiing on Cheval Blanc for many years and had seen all this great terrain for a mountain bike trail,” said Marchand-Smith. 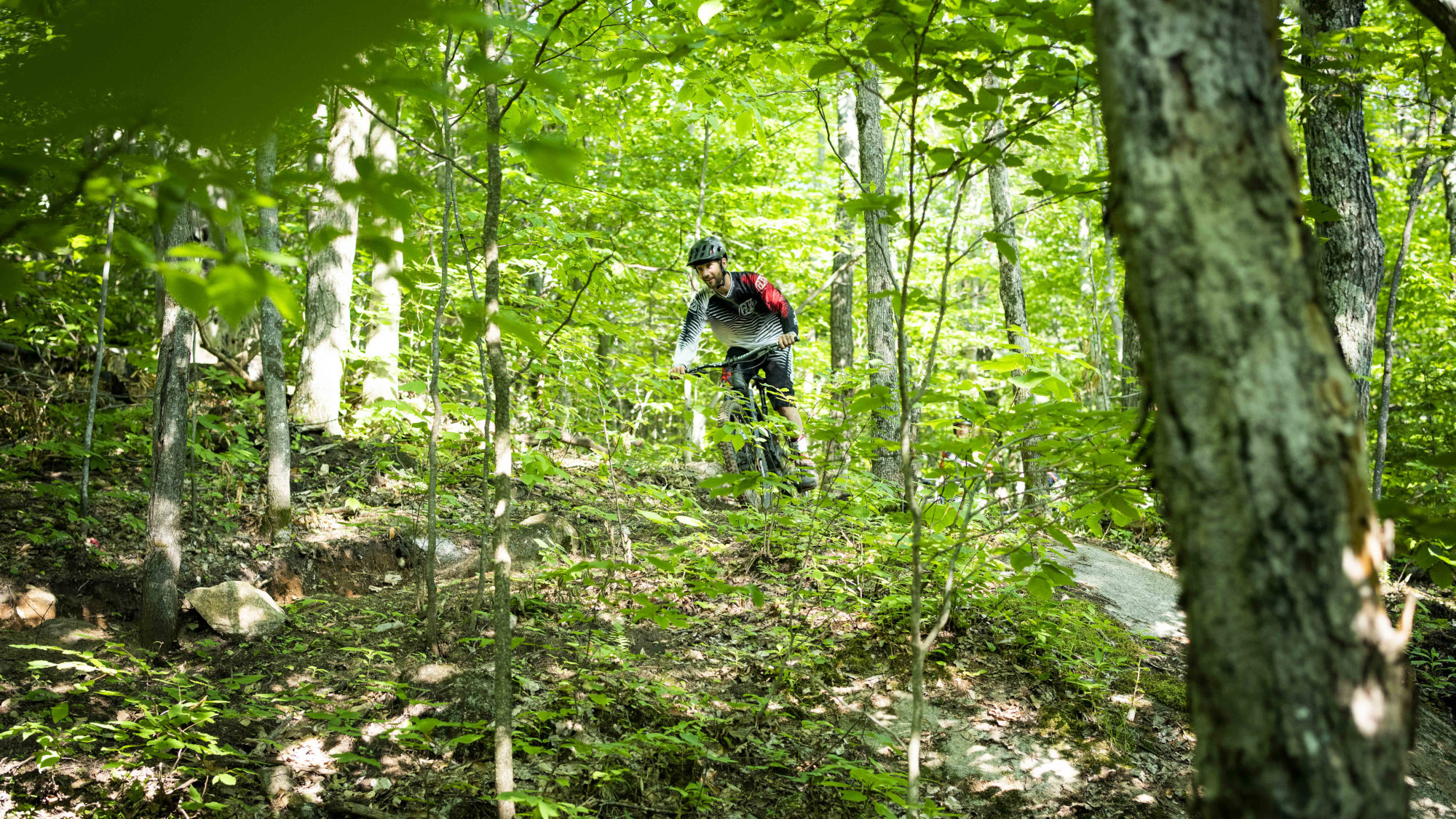 At the time, he had been a committee member with VeloMSM, where the priority had been to expand the mountain bike trail network with an emphasis on intermediate trails. The terrain David had in mind offered up some very challenging lines that didn’t fit into the immediate plan, but David was hooked on the idea of a long descent over challenging terrain that would feed directly into the lake loops. Each year he eyed the slope, building in his imagination the ideal line down the mountain. 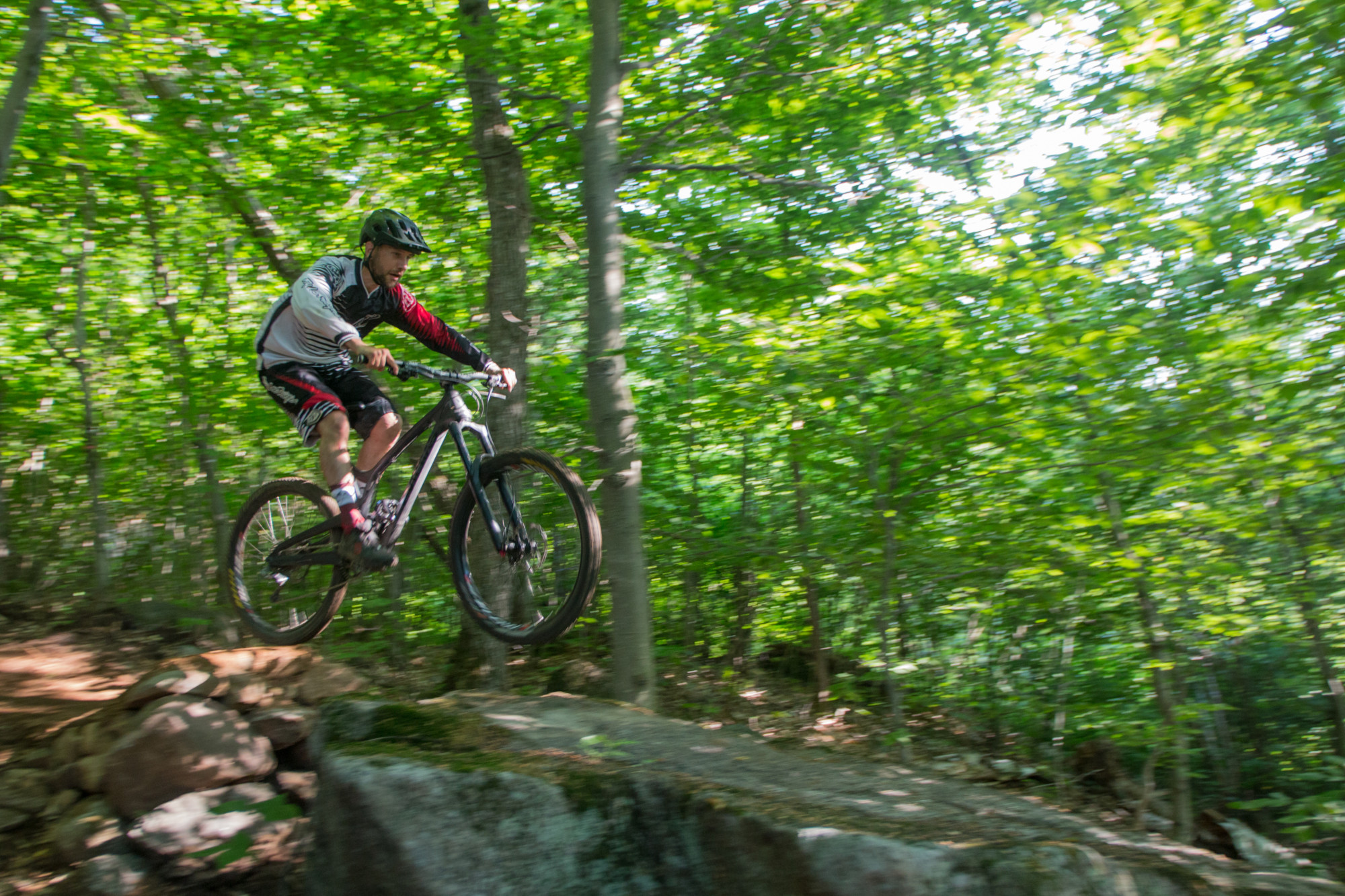 David now owns Terrasculpt, a trail building company that has contracts with VeloMSM and Camp Fortune, among others. As the intermediate offerings at Mont Sainte Marie became more developed, the timing for a new black diamond trail started to look good. This proved to be the moment for a new trail dubbed Boneshaker.

“We’ve been able to use all these features starting off at the top of Cheval Blanc,” said David. “At the same time, we’ve kept it rideable for strong intermediates by using alternate lines around the hardest stuff. 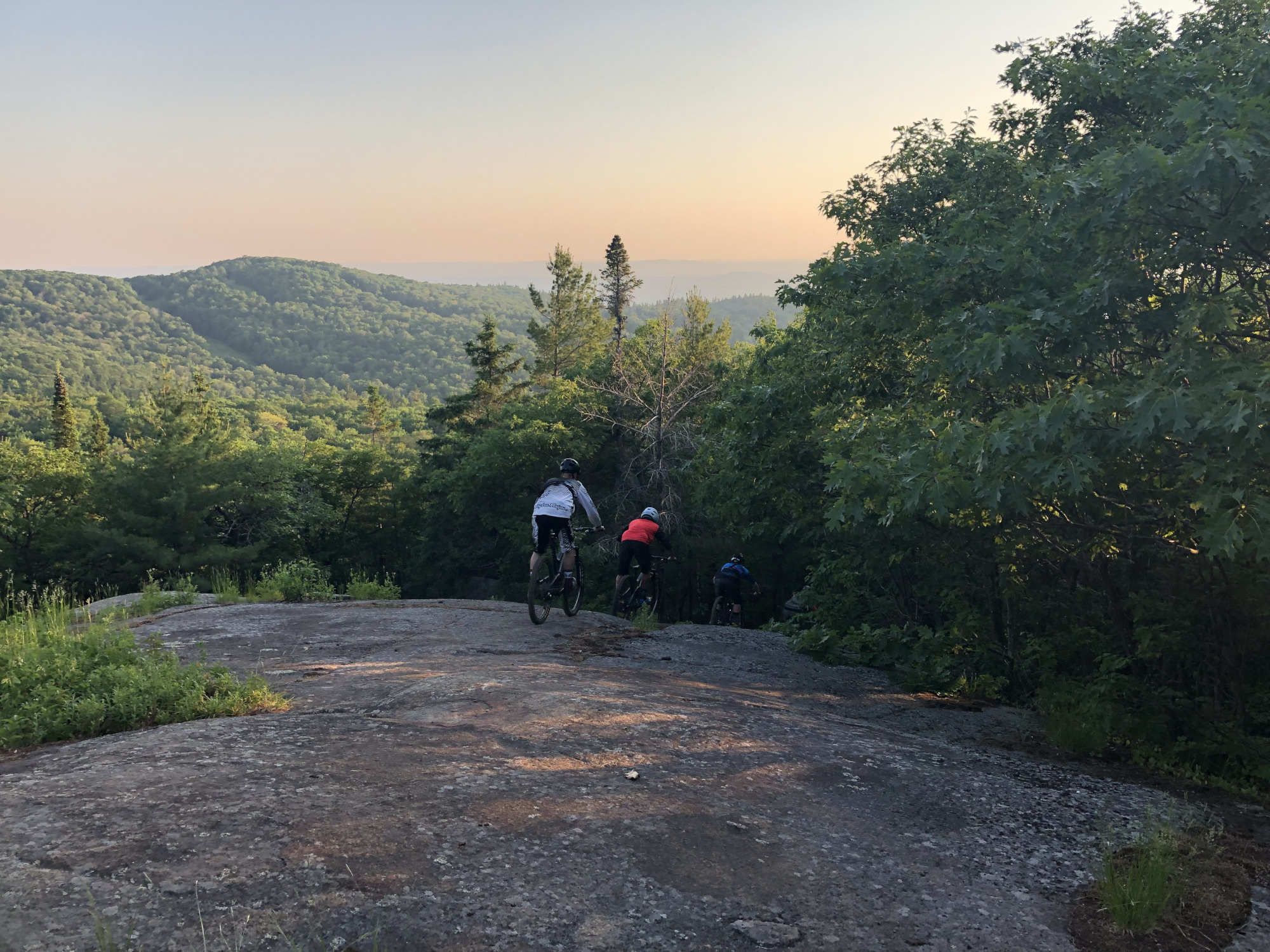 The entry to the trail extends from the right side of the granite lookout at the peak of the mountain. The main line is a two-pitch rock roll with a wooden bridge partway through. To the left of the main line is a B line, no less steep, but shorter. Both have smooth roll outs into a jump.

“We use that rock roll as a way to filter out riders who aren’t up for what else lies ahead on the trail,” said Marchand-Smith. “Once riders see it, they can decide if they’re ready to ride something that hard. It helps keep less experienced riders from getting in over their heads.

“It’s a big feature, but it’s safe, and we’ve built safety into every part of the trail.” 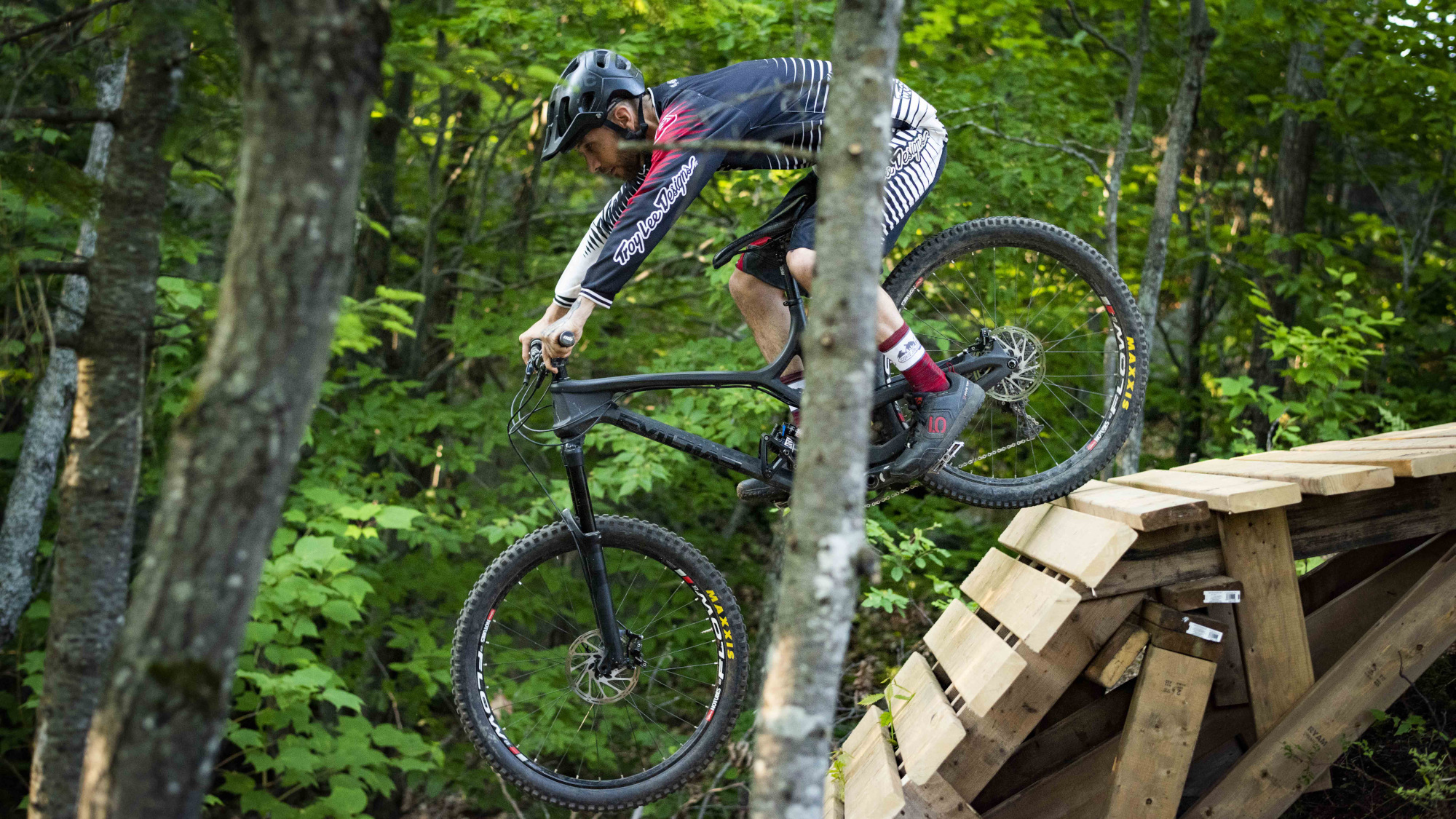 Clean landing areas and open fall zones mean that if a rider is outdone by the trail, they’re likely to stand up, brush off, and keep going.

So what exactly does lie ahead? Marchand-Smith invited Rory Gonsalves and Matt Woods up for first tracks. 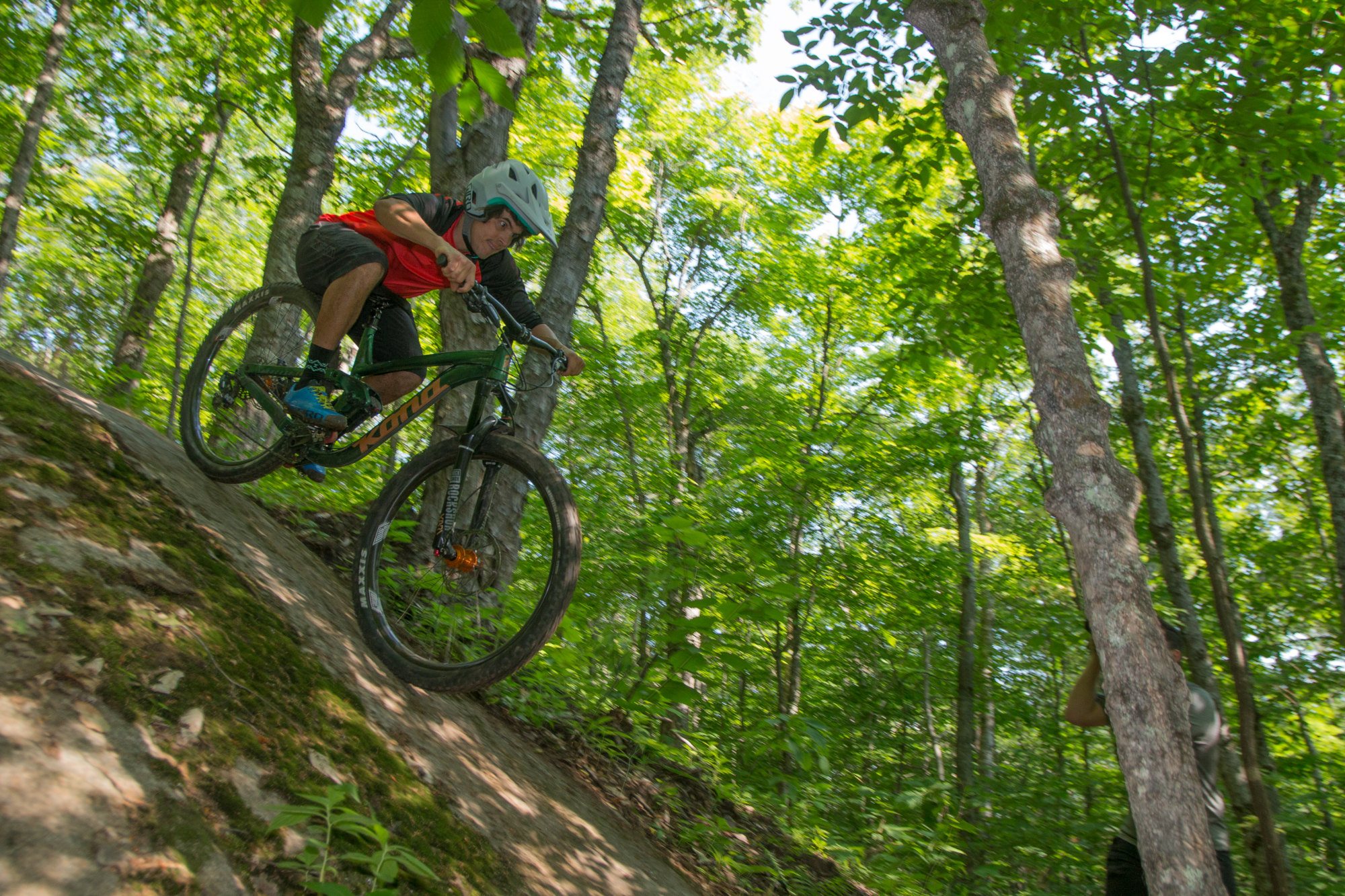 “The trail definitely isn’t rideable for everyone,” said Gonsalves, following a couple of hours sessioning different features and then riding the whole trail on a Kona Process 153 29er. “But there’s a medium and advanced option for most things so an intermediate rider could still have fun on the trail.

“The hardcore guys can still scare themselves though.” 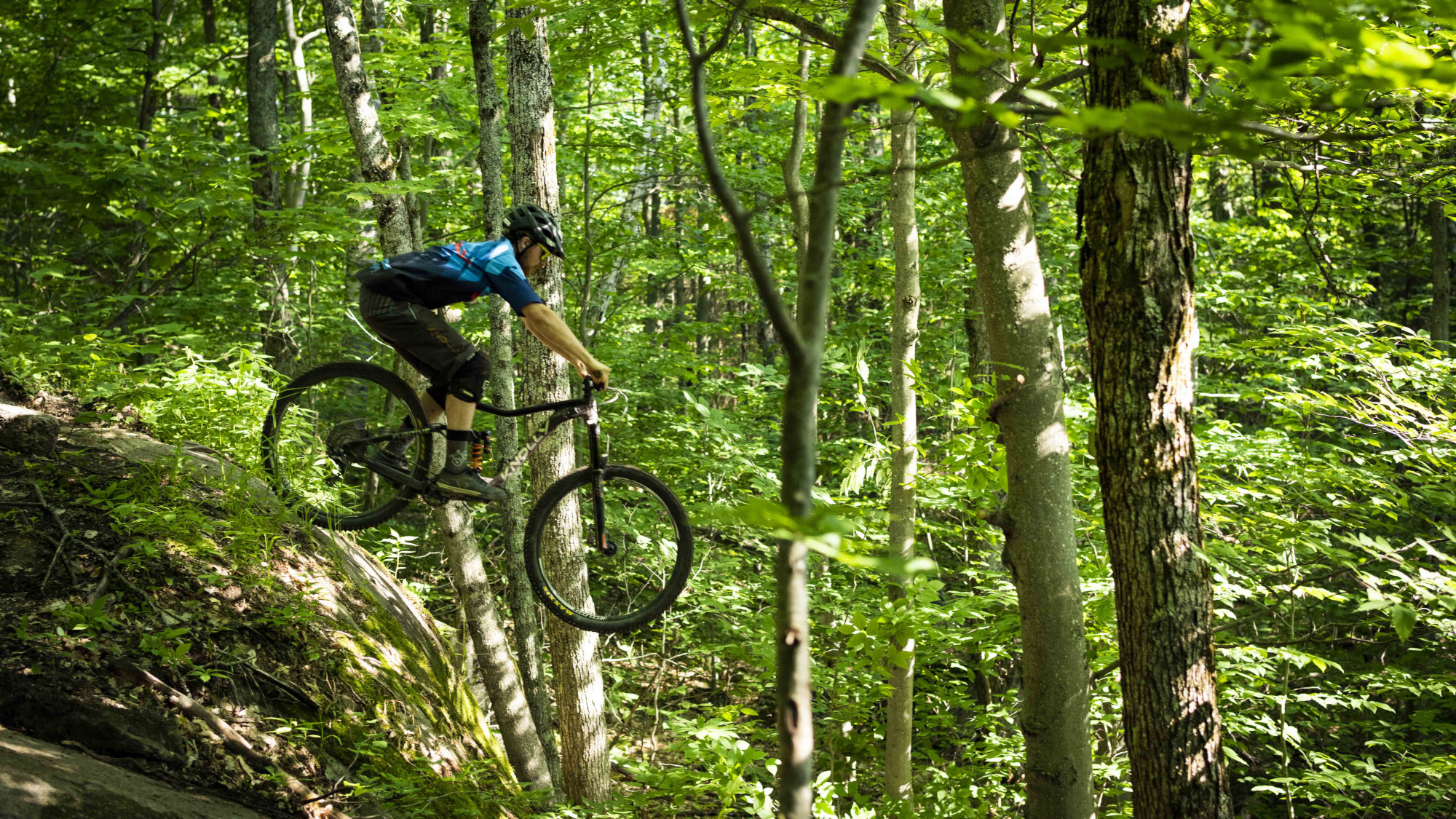 Gonsalves feels the best part of the trail is a rock feature with three lines. The main rock roll is down the middle, though riders can divert to the right for a rocky bypass line. Those with the skills can find their way to a 6’ drop, though the entry is mostly hidden from above – you have to know it’s there to get to the drop. 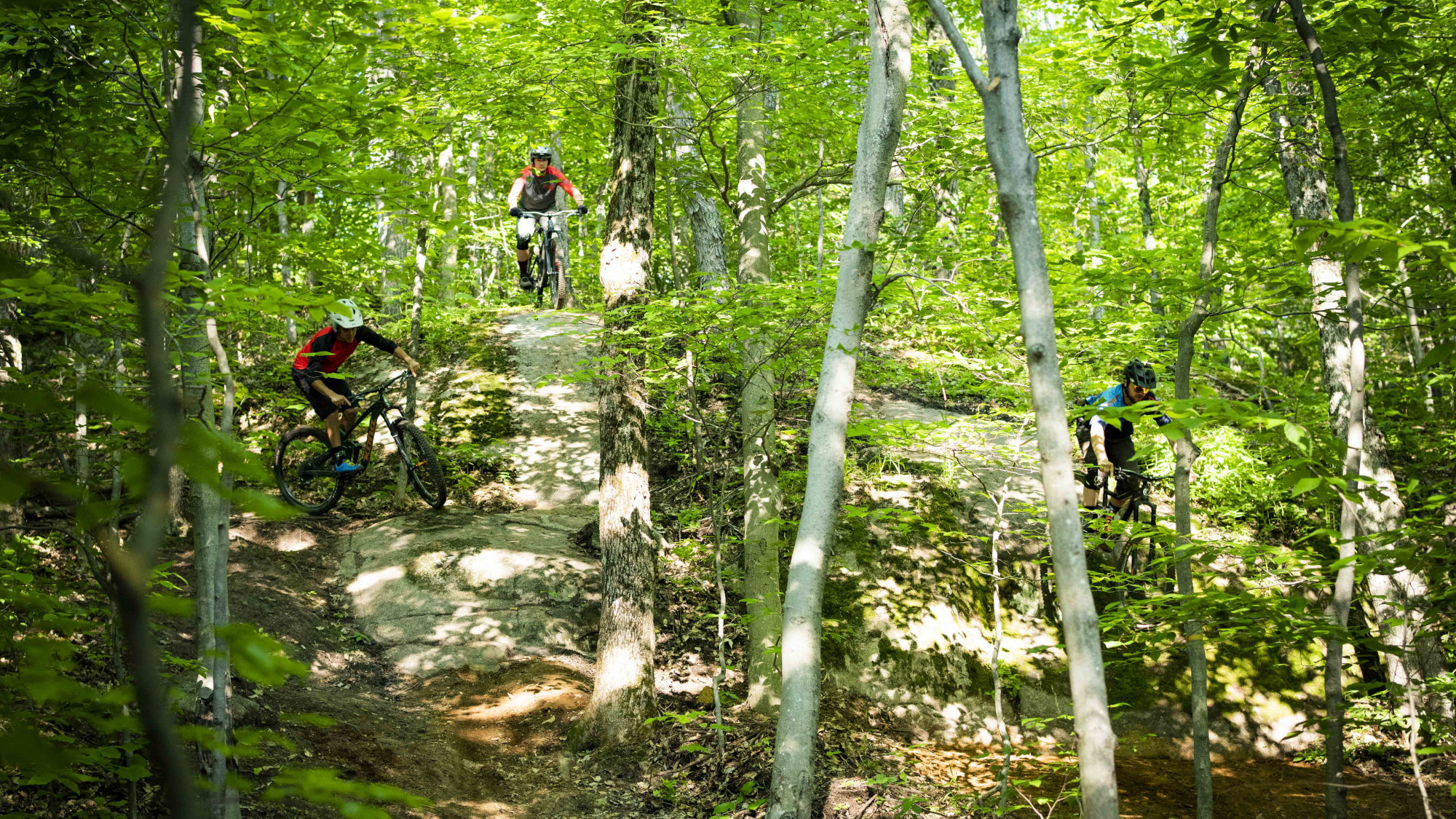 After that, there’s a jump that could be rolled at low speed feeding into three berms – right, left, right – that according to Gonsalves, are “perfect.”

After crossing a service road, the trail continues under the name Maibock, with a short climb into more rock rolls, jumps and flat sections that look easy but reward good line choice and strong riding. The flow really develops well in the second half, as the trail cuts through a more open forest area used for glade skiing in the winter.

For Woods, who rides a Norco Range, the roll in at the start of Boneshaker is special, and worth savouring.

“It’s so picturesque up top. You get a view over the whole valley,” said Woods. “It sets the tone for the rest of the trail really well. You roll into a flowy trail with jumps and technical rock features.” 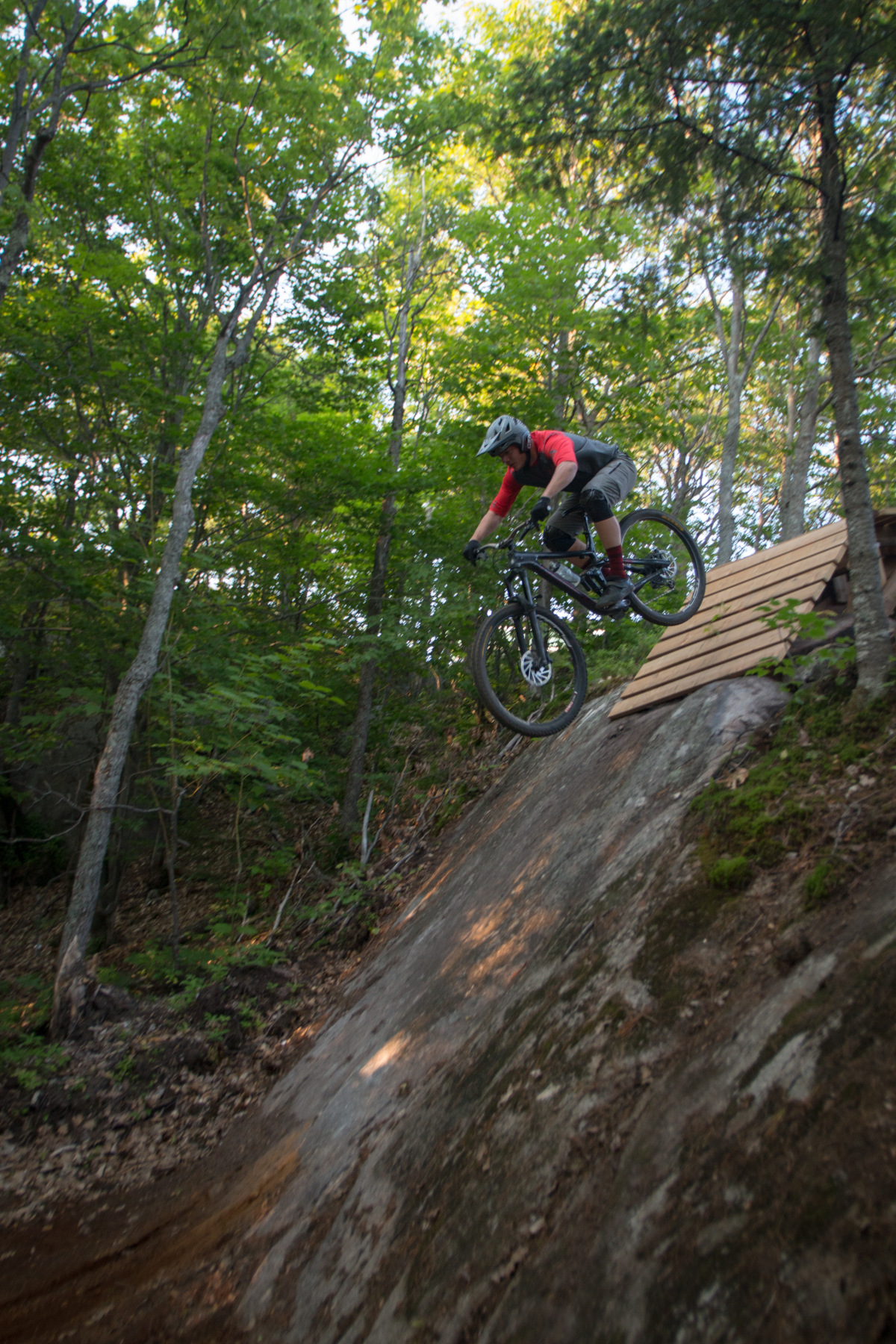 Don’t be fooled though, even with the smooth stretches between some of the features, there’s still enough challenge to keep riders on their toes.

“You don’t want to miss a feature because you’ll get off flow,” said Woods. 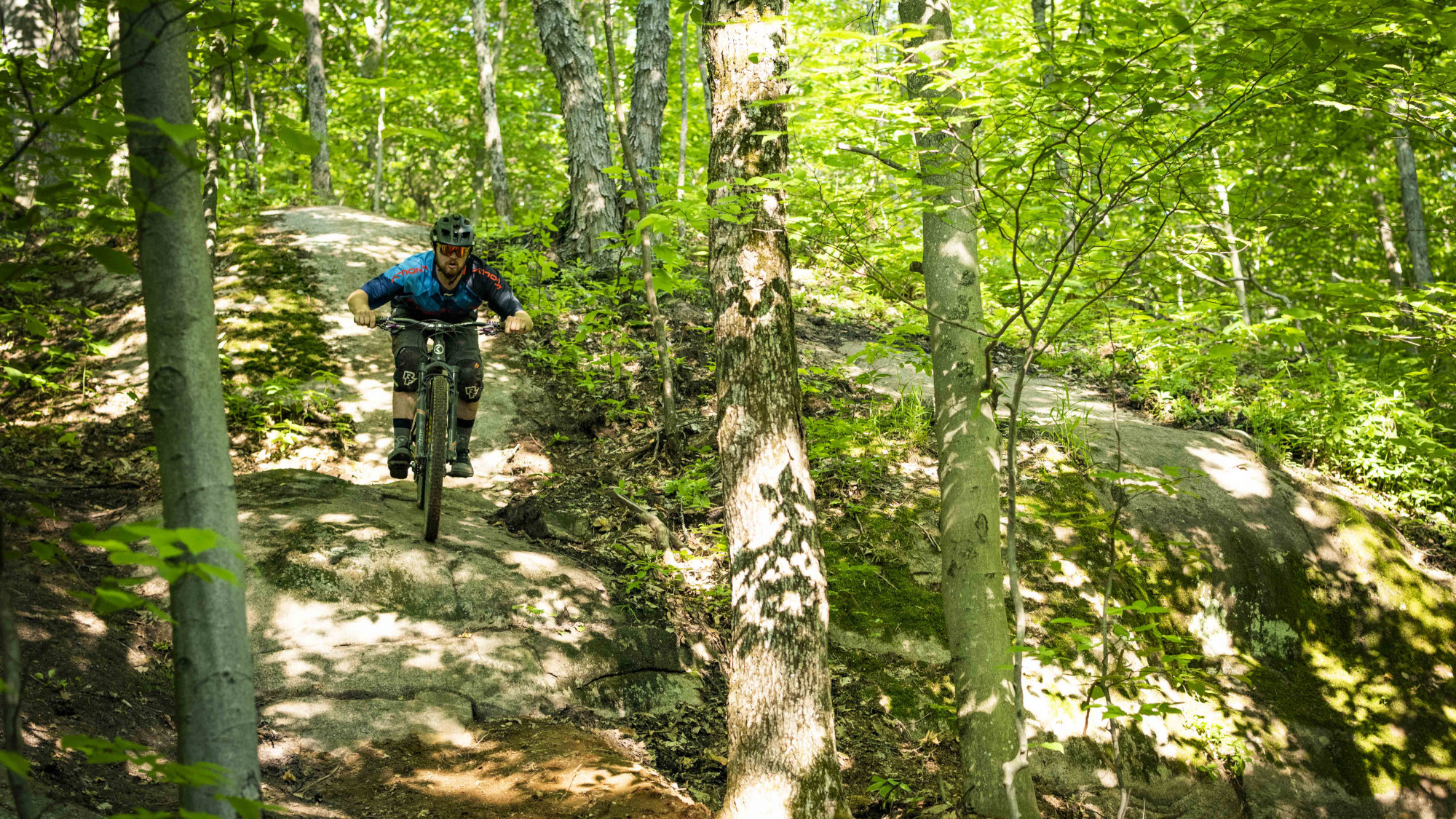 “Lager is really technical, while Growler has great flow,” said Gonsalves. “Boneshaker is a really good balance of both in nature, but very demanding.”

“Anyone already riding Lager will find Boneshaker to be a good step up,” said Woods.

Maibock connects near the bottom of the T TOP climb, setting up a perfect loop for human powered laps. Maibock was a hidden gem that has just been added to the MSM network officially. It’s relentlessly steep and full of big rock features, but fewer jumps than Boneshaker. David and his crew have begun work on a new section of Boneshaker to provide and alternate descent to the bottom of the mountain. 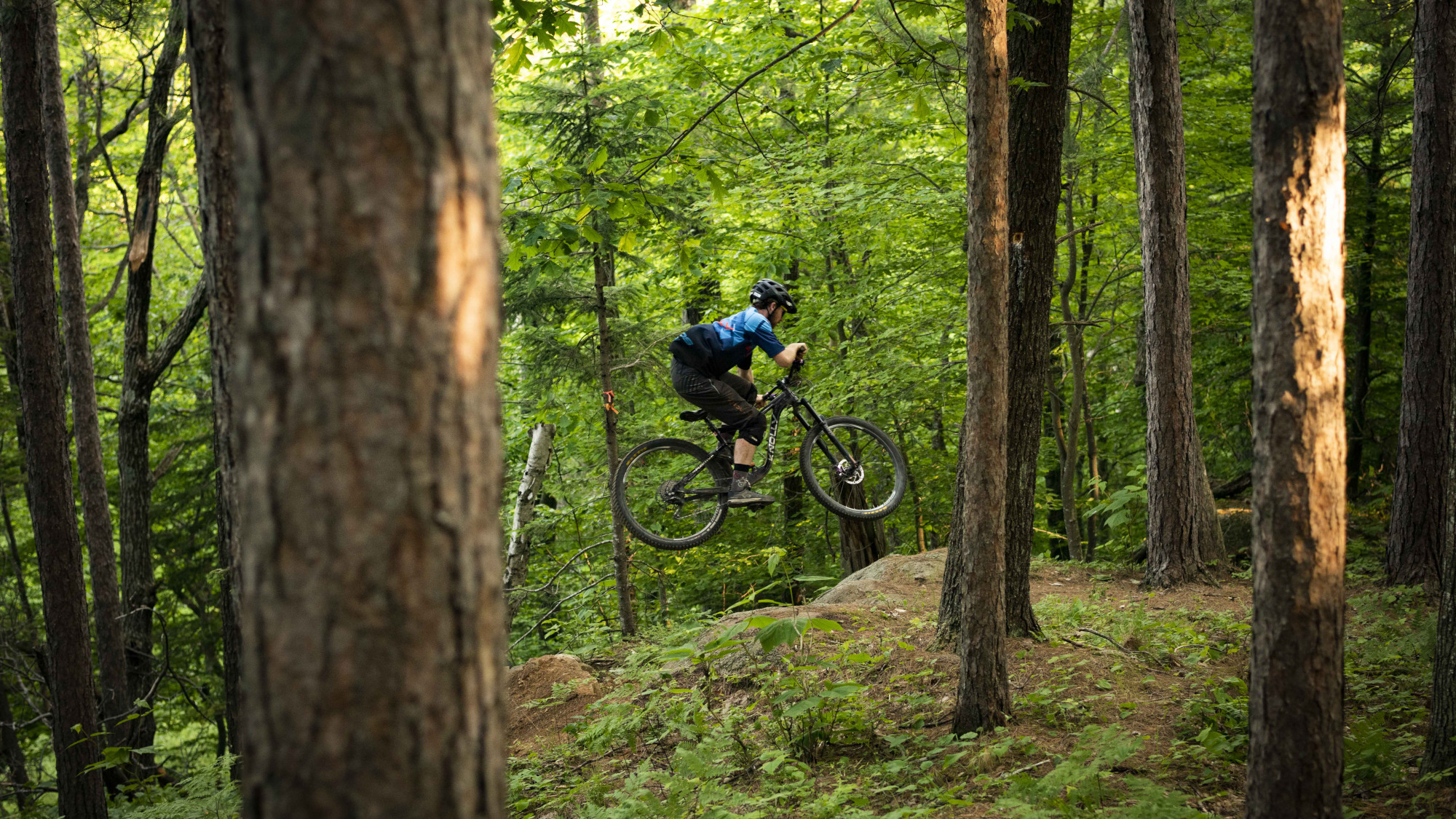 After a solid evening on the trail, Gonsalves, Woods, and Marchand-Smith hung around with the builders who brought the vision to life for a round of Amsterdam Brewery’s Boneshaker -what else - around a campfire. 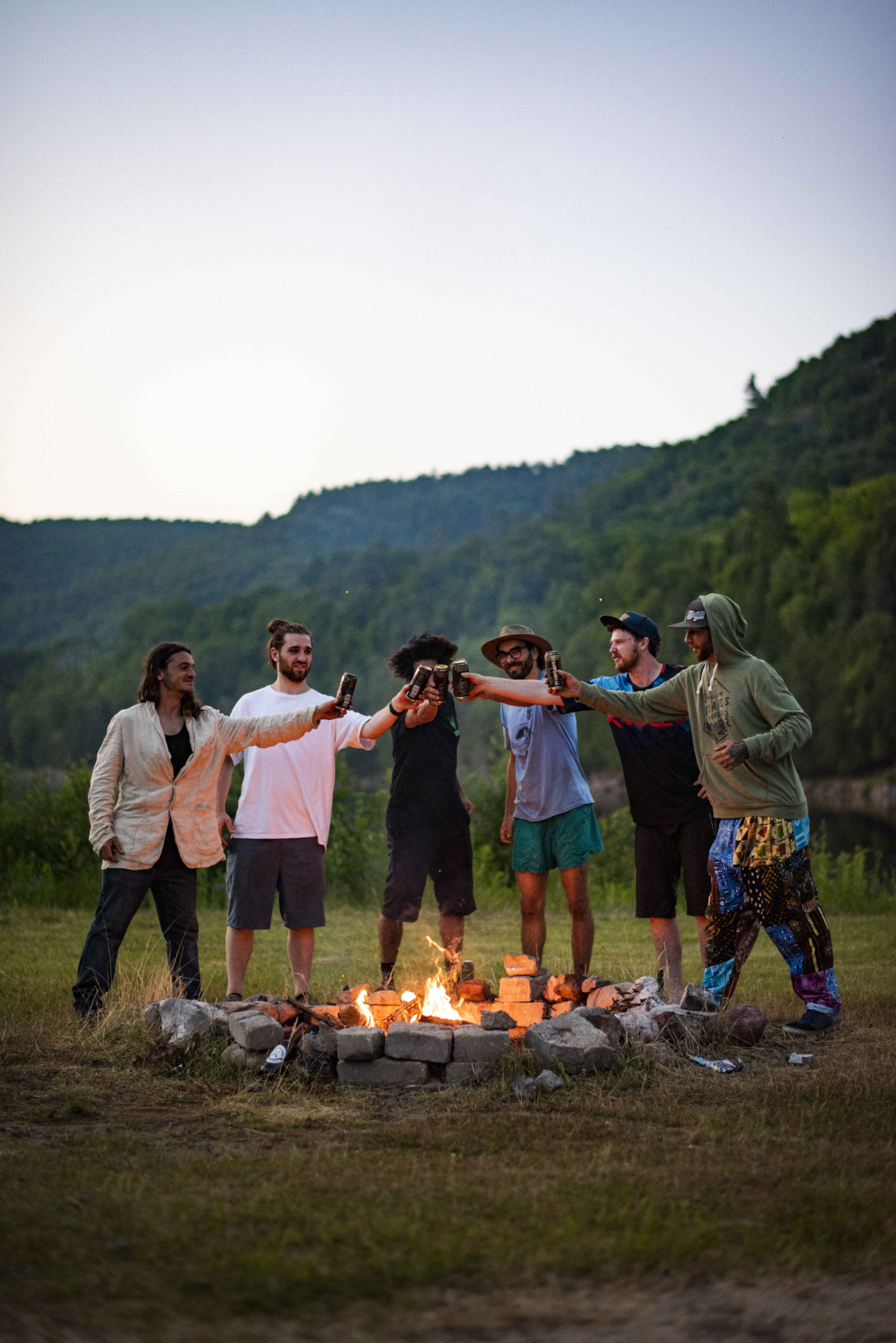 Boneshaker and Maibock are now open to be ridden, and is a must-do for strong riders at VeloMSM Mountain Fest, July 26-28, 2019.

If you’re looking for a new ride well suited to trails like Boneshaker, visit Full Cycle to book a demo bike and make the trip to VeloMSM soon!